On September 21, Marleen Tutenel (1956) from Zonhoven received an honorable award from Obid Khakimov, director of the Center for Economic Research and Reforms. This award was given her for series of articles and photos about Uzbekistan and in particular her article about getting married in Uzbekistan.

She received the award at a reception hosted by the Ambassador of Uzbekistan in Brussels on the occasion of the 30th anniversary of the Republic of Uzbekistan at the Renaissance Hotel in Brussels.

Marleen, who often travels to Uzbekistan with her husband John Reinhard, was completely surprised by the award. Soon Marleen and her husband hope to travel to Uzbekistan again, partly to finish the book they are working on together.

Uzbekistan is a former Soviet republic in Central Asia that opened its borders to tourism a few years ago. For residents of Belgium, among others, there is no longer a visa requirement.

"Go there quietly on holiday, it is a beautiful, safe, wonderful country," says Marleen. 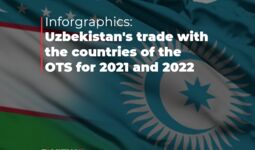 Infographics: Uzbekistan's trade with the countries of the OTS for 2021 and 2022