It is a little unusual in this day and age to visit places very few Westerners have any knowledge of. Uzbekistan, and its capital city Tashkent, seem to fit into that category

Located in Central Asia it was part of the Soviet Union until it achieved independence 30 years ago. In the last few years a rapidly growing population and an increasingly diversified economy has seen Uzbekistan experience something of a boom. At the heart of this is Tashkent, which has a population of around 2.5 million people. (CNN: Tashkent as travel destination)

Most visitors to Uzbekistan tend to ignore Tashkent and head to ancient cities such as Samarkand and Bukhara -- which are famous for being part of the Silk Road, the ancient trade route that ran from China and India to the Mediterranean. But as the capital continues to grow it looks increasingly likely that it will become a destination in its own right.
The international airport in Tashkent is located, somewhat surprisingly, pretty much in the middle of the city. When you leave it the first thing you notice is how clean the streets and pavements are. This is due, in no small part, to the vast army of high-vis clad cleaners who seem to gather on every corner. If you look closely you will also notice that the cars all look very similar. Until recently more than 90% of cars sold in Uzbekistan were Chevrolets.

An easy way to discover a little of the culture of a city is through its food and a first stop for most visitors with a desire for an authentic -- if much photographed -- experience is the Plov Centre (also known as the Pilaf Centre).
The centre, which looks resembles a huge sports hall, is the place to try pilaf, which is eaten by Uzbek people from the moment they wake up until lunch. Don't try and order it after lunch, it shouldn't be available.
Here the dish is prepared in a giant cauldron. Rice, carrots, lamb and various spices are all part of the mix. Grab a table, make your order (boiled eggs and horse sausage come as extras) and await your food. It is often served with a sweet tea. 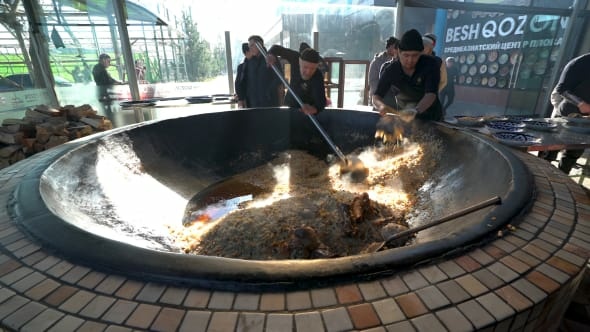 Another must-visit culinary destination in the capital is the Chorsu street food market. In the covered market there is row upon row of stalls selling everything from meat to soft cheese (a very popular ingredient in Uzbekistan).
There is also a vast number of stalls selling kimchi and other Korean delicacies. It might seem out of place among the traditional offerings, but the relationship between Uzbekistan and Korea is a long-standing one. Koreans began settling in Russia from the middle of the 19th century. In 1937 Soviet leader Joseph Stalin, fearing that the Korean community might enable Japan to infiltrate the country, ordered the mass deportation of Korean people.
Many ended up in Uzbekistan where they have thrived -- hence the huge number of Korean food stalls.
Street food is very popular -- the most in-demand dishes being meat on a skewer cooked over a naked flame. It is a little ironic, perhaps, that this most traditional way of preparing and serving food is now being replicated at hipster food markets everywhere from London to LA. 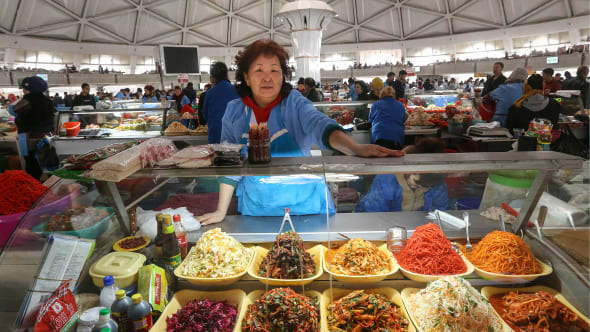 If street food and communal eating aren't your thing there are, of course, many more conventional culinary experiences available, including Italian, Georgian and, quite naturally, Korean restaurants.

Going underground and growing up

An unexpected but unmissable tourist attraction is the city's underground stations. Around the world underground systems are generally functional at best, but rarely beautiful. In Tashkent, which has Central Asia's oldest underground system, the stations -- which opened in the 1970s and were meant to double up as nuclear bomb shelters -- look like galleries. Art works, murals and mosaics honor the country's cultural icons.
Beautiful underground aside, Tashkent is a city to walk in. From the ground you can see a skyline full of cranes and scaffolding-surrounded buildings. It is a place that seems to be in a hurry to grow up. But among the new shopping malls and high-rise buildings there are occasional reminders of what the city once was.
Mosques and madrasas are everywhere. In the Hast-Imam library is the Samarkand Kufic Quran which many experts consider to be the oldest Quran in the world. While Uzbekistan has been a secular state since independence, around 80% of the population of country is Muslim.
As Tashkent opens itself up to a whole new set of visitors, that blend of the traditional and modern means it could soon become a must-visit destination for people looking to experience something different.
Subscribe to our Telegram channel
Share this post