It was noted that Uzbekistan has developed a systematic and step-by-step model for the implementation of international human rights standards in national legislation and law enforcement practice.

"The President of Uzbekistan Shavkat Mirziyoyev has initiated comprehensive reforms to liberalize the socio-political life of the country and ensure the rule of law in accordance with the principle of human interests take precedence over everything else, the newspaper said. - Strict observance of human rights and freedoms, strengthening the role of state and public institutions in justice have been identified as priorities. Uzbekistan is a party to more than 80 international human rights instruments, including six major UN treaties and four optional protocols. National reports are regularly submitted to UN human rights bodies on their implementation. ”

According to the Japanese newspaper, a lot of work has been done to eliminate forced labor, as well as to end child labor. "The government has worked closely with international organizations (including the International Labor Organization) and civil society activists", the paper said.

The article details the ban on forced labor and child labor in Uzbekistan's cotton industry. 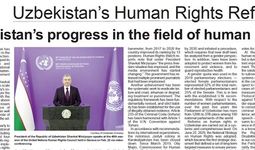