Today, the service sector is one of the main drivers of the global economy and the working population. In Uzbekistan, it is also an industry with a high share of GDP, accounting for more than 40 percent of the employed population.

According to the State Committee of the Republic of Uzbekistan on Statistics, in January-September 2020, the gross value added of the service sector amounted to 136,403.9 billion UZS ($13 billion) and, compared to the same period in 2019, decreased by 0.7 percent. Services to GDP of the country have a leading position and in January-September 2020, the share of services reached 36.2 percent.

Although the positive impacts of Uzbekistan's digital transformation have been apparent during the COVID-19 pandemic, there are also multiple directions for improvement. Internet access is uneven across Uzbekistan, while the digital economy contributes just 1.8 percent to the national GDP. 70 percent of 700 government information systems are not integrated with the e-government platform, and only 27 agencies provide services through the national public service delivery framework.

Currently, Uzbekistan has had low access to information and communication technologies. In terms of the use of ICT in 2017, it ranks 95th in the world among 176 countries according to the ICT Development Index. According to the Telecommunications Infrastructure Index, Uzbekistan is ahead of only Turkmenistan and Tajikistan among the CIS countries, and with an indicator of 0.3307 it lags behind Russia, Belarus and Kazakhstan by almost two times.

The digital progress of the country, according to experts, is constrained by a low level of public confidence in digital documents and services, lack of highly qualified specialists in the field of digital technologies, inefficient and insufficient government funding for digital projects.

Despite the above mentioned obstacles, Uzbekistan has been actively digitalizing most industries. With an eye to the current situation and adoption of regulatory documents, in March 2020 President Shavkat Mirziyoyev signed a Resolution, "On measures for the widespread introduction of digital technologies in the city of Tashkent." The document provides for the priority attraction of residents of the Technological Park of Software Products and Information Technologies, which has incorporated 350 domestic enterprises to the implementation of the comprehensive program Digital Tashkent. The program is aimed at digitalizing municipal services management and creating an integrated information environment for social facilities, industrial, road transport and utilities infrastructure, with the subsequent spread of successful experiences to other regions of the republic.

The Digital Tashkent program is a follow-up of the initiatives the president put forward in his Address to the Oliy Majlis on January 24, when he announced 2020 as the Year of Science, Education and Digital Economy. The initiative has turned out to be unprecedentedly forward-looking and timely - a month later the world was gripped by the pandemic. And digitalization strategies for the economy, especially education and health, became the only way to keep working, protect the population, and save people.

Innovative projects under the Digital Tashkent program 2020-21 cover key areas, including health, education, public administration, utilities, trade, tourism, urban geosystems, construction, and even environmental protection. The program is ambitious - it is planned to introduce e-government, e-polyclinics and hospitals, medical appointments and prescriptions, digitize registration of patients and medical staff, a Mahalla system, air control system, price control in the markets, and many other innovative solutions.

Having quickly navigated in an unprecedented situation, Uzbekistan is now fully applying distance education, electronic accounting of utilities, electronic banking, the list of electronic public services for citizens (currently 130 types) is updated monthly, ministries and departments daily interact with each other through videoconferencing.

According to UzDaily, the number of internet users has grown to 22 million, including 19 million mobile internet users. The number of users using internet services through fixed communication systems is now three million.

Moreover, as of October 1, 2020, the number of mobile subscribers in Uzbekistan made up 24.8 million. However, the share of IT-specialists among the employed population was 0.5 percent in 2019, which is almost seven times less than, for example, the average for the EU countries (3.7 percent). At the same time, the demand for IT-specialists in the country is growing rapidly, and the shortage of personnel in this area can lead to negative consequences both for the private sector and for effective public administration.

Studying foreign experience in digitalization, along with other developed countries, Chinese experience is worth mentioning. Over the past few years, China has huge human and financial resources, and claims the status of an innovative power and technology leader through the active promotion of the digital economy at the state level. Digitalization in China is a key driver of national economic development today.

Digital technologies have made ample contributions curbing the coronavirus in China. To combat the epidemic, China developed the latest IT products. A system of quantitative analysis of medical images by means of artificial intelligence was developed to help diagnose pneumonia caused by the novel coronavirus.

The artificial intelligence system has also been a help for recognizing people with a fever or who do not wear a medical mask. The country has launched a mobile application that identifies if the user has been in close contact with a carrier of the deadly virus over the past 14 days, and if a user has symptoms of coronavirus infection. Patrol and sprayer robots service the streets, self-driving vehicles deliver food and medicines, and drones treat houses with antiseptics. COVID-19 has accelerated digitalization in China's medical and industrial sectors as the country recovers from the virus outbreak.

According to experts, the speed with which China has mitigated the impact of COVID-19 - from the identification of the first case, to outbreak, to containment, to the resumption of normal way of life - is unprecedented. Digital business models and new technologies have played and continue to play an important role in the country's success.

Moreover, in today's rapidly changing realities in the context of a pandemic, many countries have switched to active use of artificial intelligence, which is considered the best indicator of digital development. Therefore, in some countries, the creation of smart cities begins with digitalization of the government itself; then it can proceed with programs and initiatives on the transition to a digital form of information transfer to other areas of life. For instance, in the UK, Denmark and Singapore, the process of interaction between business, public and government agencies is almost 98 percent maintained through online services, mobile applications, and innovative software.

President Mirziyoyev's Decree on October 5, 2020 approved the Strategy "Digital Uzbekistan - 2030" and "Roadmap" for implementation. According to the document, from August 1, 2021, all state mandatory payments, including duties, fees, and fines will be made online. Within the framework, over 400 information systems, electronic services and other software products in various areas of socio-economic development will be carried out automatically.

As part of the implementation and further improvement of the comprehensive Strategy, the first priority is close interaction between government bodies and business entities. This will contribute to the formation of a solid and perfect organizational and legal basis for the introduction of innovative ideas, technologies and business.

The second priority can be to actively stimulate IT students to initiate innovative projects by the example of the large-scale initiative "One Million Uzbek Coders." This will shape a generation of digital specialists with programming skills and new thinking.

Third, in order to facilitate and improve the efficiency of doctors in the fight against the epidemic, it is advisable to study the effective experience of developing countries and their innovative developments, and adapt them as quickly as possible to the healthcare system of Uzbekistan.

Fourth, at the initial stage, the Republic needs foreign experience and experts who would help adapt the best international practices to the conditions of Uzbekistan, and improve them at further stages.

The digital economy and digital technologies have become the driving locomotive during the crisis and structural reforms in the telecommunications sector will contribute to the accelerated development of digitalization in various areas such as education, telemedicine and employment. Digitalization will also be able to maintain consistent functioning for the business activity of local firms and companies. This can attract significant volumes of private investment to create open, competitive markets for telecommunications services in which the private sector plays a significant role.

In the context of the global pandemic, the development of the digital economy and digital technologies has become the catalyst for all innovative solutions. The IT sector opens up a huge field of opportunities that need to be used for the prosperity of the nation and state.

The author is project coordinator at the Development Strategy Center, Tashkent, Uzbekistan. opinion@globaltimes.com.cn 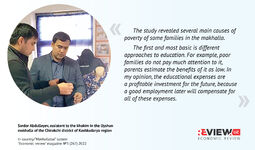