Uzbekistan’s banking sector accounted for 60.6% of the country’s GDP in 2021. Although the positive trends in the banking sector of Uzbekistan have strengthened in recent years, the share of funds received from the government remains high in commercial banks with state assets. The dominance of state-owned banks has contributed to the low level of financial intermediation constraining access to finance in Uzbekistan. Being dominated by inefficient public banks, and it is going to be shaken by a large-scale privatization plan. 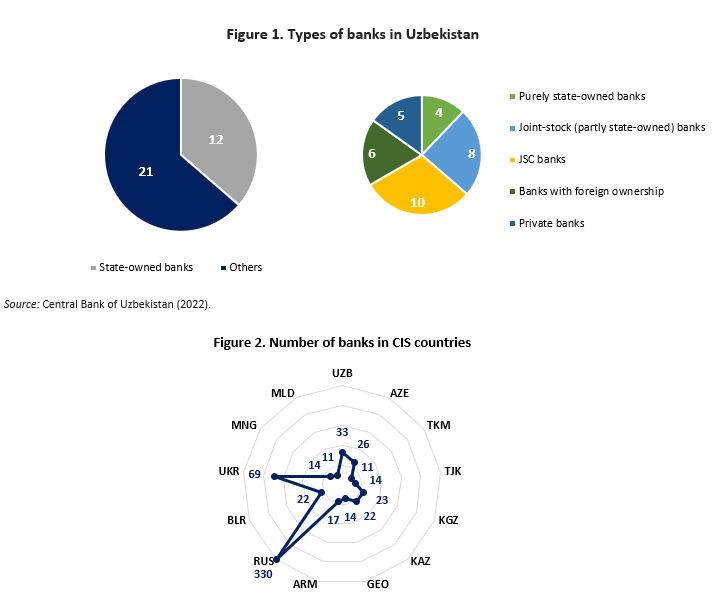 Uzbekistan has the largest number of operating banks among other Central Asia countries, for instance, Azerbaijan – 26, Kyrgyzstan – 23, Kazakhstan – 22, Tajikistan – 14, and Turkmenistan – 11 banks. However, Uzbekistan takes only 3rd place among the CIS or post-Soviet countries after Russia – 330 and Ukraine – 69 banks (Figure 2). So, given the population size of 35.4 million, there are very few banks in Uzbekistan.

Uzbekistan’s state-owned banks support the government’s economic priorities mostly through subsidized loans offered to specific sectors and investment purposes. They are mainly controlled by the Ministry of Finance (MoF) and the Uzbekistan Find for Reconstruction and Development (UFRD) (Table 1). 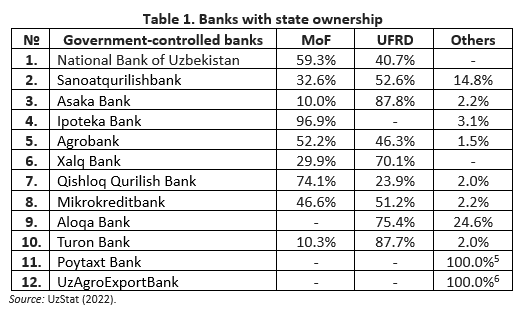 Following the impact of the pandemic, the banking sector’s profitability ratios decreased in 2021 (Table 2). The number of bad loans considerably increased over the last 2 years and stood at 5.2% of gross credit in 2021. One of the main reasons is that banks provided loan deferrals during the COVID-19 shock that caused a violation of credit payment discipline and increased credit risk. A high share of NPLs in the total credit portfolio of large banks referred to Xalq Bank (19.7%), Mikrokreditbank (5.9%), Asaka Bank (4.8%), Agrobank (4.6%), and the National Bank of Uzbekistan (4.5%). While a high level of NPLs among small banks stood in UzAgroExportBank (55.5%), Turkiston Bank (69.9%) and Hi-Tech Bank (92.7%). Nowadays, bad loan deferrals are gradually being phased out. Moreover, the President of the Republic of Uzbekistan, Shavkat Mirziyoyev, stressed that ministers, governors and mayors of regions, districts and cities, and heads of banks should be personally responsible for controlling the situation return of bad loans.

Uzbekistan’s banking sector reform has been ongoing since 2017. In the past few years, the government removed currency controls, allowing the national currency to float freely. Furthermore, by the end of 2019, the Law “On Banks and Banking Activities” was amended; the Law redefined and updated the power of the Central Bank of Uzbekistan with an emphasis on price stability and oversight and allowing foreign investors to own up to 5% of the domestic banks. Also, rules on anti-money laundering, currency transactions, settlements, and improving the availability of banking services were adopted.

In addition to this, the government authorities have launched an ambitious banking sector reform strategy 2020-2025 (Resolution of the President dated May 15, 2020, №UP-5998) to reduce the state’s role and increase the share of assets held by private banks (currently, it is 18%) up to 60% end of 2025. This should be achieved by attracting strategic investors to some state-owned banks and divesting others. In addition, the state-owned banks’ governance is being improved with the appointment of independent, professional supervisory board members.

According to the strategy, the National Bank of Uzbekistan, Agrobank and Microcreditbank remained state-owned banks to meet the needs of the population in financial services. They are subject to asset quality reviews with international audit companies’ involvement. The transformation of these banks is aimed at implementing a mechanism to support investment projects, the so-called "project factory", and ensuring regional availability of banking services during the period of reforming the banking system.

Uzbekistan is set to divest its stake in 2 small state-owned banks as part of an ongoing privatization process. SAMA is responsible for disposing of a 100% equity stake in Poytaxt Bank and UzAgroEksportBank through an open tender process. In February 2022, Sovkombank (Russia) acquire a 100% stake for $4 million in UzAgroExportBank. The international company Grant Thornton was engaged as a privatization consultant, while the assessment was made by KPMG. Currently, the signed deal is to be processed with some legal procedures. In September 2021, Expobank (Russia) signed a memorandum regarding the privatization and acquisition of Poytaxt Bank. Deloitte was appointed respectively as privatisation consultants to enable the transaction.

The sector’s modernization also includes the privatization of 6 large state-owned banks. So, Ipoteka Bank, Sanoatqurilishbank, Asaka Bank, Aloqa Bank, Qishloq Qurilish Bank, Turon bank, and UzAgroExportBank, Poytaxt Bank, were placed to be slated for privatization. With the assistance of the international financial institutions, these banks will be stressed the institutional transformation in the first stage, then, the implementation of the state block of shares. In September 2021, Deputy Prime Minister of Uzbekistan, Jamshid Kuchkarov, announced the sale of a 75% stake in the state-owned Ipoteka Bank to OTP Bank (Hungary). With the assistance of IFC, it was planned to complete the deal within 2 months. Although the deal was ready to be signed, in April 2022, the OTB asked to postpone the deal due to the Russia-Ukraine conflict.

In addition to the steps taken, a Resolution of the President dated March 18, 2022, №PP-168 was signed to expedite the ongoing privatization process. MoF is to be set to continue the transformation and privatization of state-controlled banks and ensure the IPO of Qishloq Qurilish Bank till October 1, 2022; Sanoatqurilishbank and Asaka Bank are subject to being offered for auction with the involvement of the IFC, EBRD, and ADB by the end of 2022. Xalq Bank, Microcreditbank, Aloqa Bank, and the National Bank of Uzbekistan should be placed for the IPO on the stock exchange by July 1, 2023.

Banks were resilient during the pandemic, with only an increase in non-performing loans (NPLs). While credit growth has slowed to more sustainable rates, the negative stresses from the pandemic and past credit expansion may yet emerge. While Uzbek banks have limited exposure to sanctioned Russian banks, lower trade and remittances may cause an increase in NPLs. Loan portfolios continue to show high concentration and foreign currency risks, with the largest exposures mainly to state-owned enterprises (SOEs). The CBU should continue to closely monitor banks’ liquidity and capital positions, including through updated stress tests, and stand ready to provide liquidity support to viable banks when needed.

Uzbekistan’s banks were resilient during the pandemic in 2019-2020, with only an increase in NPLs. However, the beginning of 2022 added new challenges, a conflict in Ukraine with subsequent sanctions upon Russia impacts Uzbekistan due to the close connection of Uzbekistan's economy with Russia’s economy. While Uzbek banks have limited exposure to sanctioned Russian banks, lower trade and remittances may cause an increase in NPLs. Moreover, loan portfolios continue to show high concentration and foreign currency risks, with the largest exposures mainly to state-owned banks. The Central Bank of Uzbekistan should continue to closely monitor banks’ liquidity and capital positions, including through updated stress tests, and stand ready to provide liquidity support to viable banks when needed.

State-owned bank reform remains crucial for creating a healthy and competitive banking system that can efficiently facilitate financial intermediation and finance growth. Given the new challenges of 2022, the banks' privatization agenda might be slowed down for a while, especially if the transactions were expected with Russian banks (the case of Poytaxt Bank and UzAgroEksportBank). Nevertheless, government-controlled banks should continue efforts to improve corporate governance. Cooperation with international financial institutions should also help ease some of the governance problems. While the number of professional, independent members on the supervisory boards of state-owned banks has increased, more is needed to establish majority independent supervisory boards and enable the strengthening of these banks’ management boards. The reforms are expected to strengthen the system’s competitiveness and profitability, although margins will eventually shrink. Nonetheless, the outlook is positive as the expanding size of the economy can sustain higher levels of credit, while the ongoing liberalizations and privatizations across different sectors will sustain the demand for loans and other financial services. 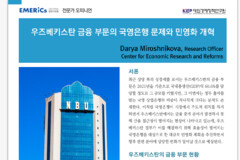 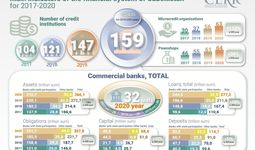 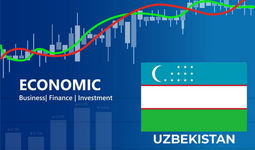 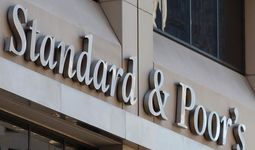 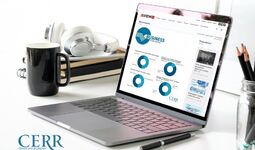