Uzbekistan’s chairmanship in the CIS

Last year, Uzbekistan for the first time fulfilled the duties of the chairman among CIS countries. Economic cooperation, foreign trade and prospects in the CIS under the chairmanship of Uzbekistan, in an article by Yuri Kutbitdinov, Leading Research at CERR.

President's Address to the country's parliament for 2020, emphasized the historical significance of Uzbekistan as a chairmanship in the CIS and the need to further increase the effectiveness of Uzbekistan's participation in this organization.

By this initiative, Uzbekistan in 2020 for the first time performed the functions of the chairing country in the CIS.

The updated Concept of video conference was held on 18 December by head of Commonwealth Council Head States chaired by the President of Uzbekistan. The main action plan for further development and implementation of the CIS was approved.

The President of Uzbekistan was the first to speak at the meeting of the Council of CIS Heads of State and made proposals for expanding multifaceted cooperation within the Commonwealth, including in the economic sphere, which can be summarized as follows:

- the fastest recovery of economies, trade and cooperation ties between the CIS countries;

- widespread introduction of the practice of "green" and simplified corridors, as well as the launch of a single platform and the adoption of the "Roadmap" for the development of electronic commerce within the Commonwealth;

- development of the "Comprehensive program of industrial cooperation of the CIS countries", which provides, the creation of joint clusters in the agro-industrial sector, in the field of mechanical engineering, electrical engineering, light and food industries, pharmaceuticals and other priority sectors;

- increasing the competitiveness of transport corridors, harmonizing regulations and standards, pursuing an agreed tariff policy and mutual granting of preferences;

- the earliest possible resumption of air traffic on a reciprocal basis in compliance with all sanitary requirements;

- ensuring social and legal protection of citizens of the CIS countries carrying out labor activities in the states of the Commonwealth, creating a single mechanism for the mutual recognition of documents of labor migrants and adopting a separate Program in this area;

- comprehensive support for the outlined peace process in Afghanistan, which will provide new opportunities for the development of trade and economic cooperation between the CIS countries and the states of South Asia.

It should be noted that the country's chairmanship in the CIS means that in 2020 Uzbekistan simultaneously chaired the Councils of Heads of State, Heads of Government, Foreign Ministers, as well as the Economic Council of the CIS and its Commission. In order to effectively perform the functions of the chairman of the CIS by Uzbekistan, the Uzbek side has developed a Concept of chairmanship in the Commonwealth, as well as an Action Plan for the implementation of this Concept.

The Action Plan for the implementation of the Concept included 6 events, including the holding of the Economic Forum and the Forum of the Regions of the CIS countries, the preparation and adoption of the Strategy for the Economic Development of the CIS for the period up to 2030, the Concept for the further development of the CIS and the Plan of main measures for its implementation, Priority areas of cooperation CIS countries in the field of transport for the period up to 2030, the Concept of interregional and cross-border cooperation of the CIS until 2030 and others.

Despite the coronavirus pandemic, which did not allow the developed Plan to be fully implemented, the Uzbek side made every effort to organize and conduct many events planned for 2020. Under the chairmanship of Uzbekistan in the CIS, many events were successfully held, both in person, in compliance with the rules of epidemiological safety and in the format of videoconferences.

In total, over 200 different events were held within the CIS and at the bilateral level with the Commonwealth countries during 2020, including meetings of the CIS Economic Council, one of which was held in Moscow (March 13) and two by video link (June 30 and September 15) ; meetings of the Council of Foreign Ministers (May 12, December 10), the Council for Cooperation in the Field of Health (July 30, October 28); "Week of Business Initiatives" (September 9-15); CIS Economic Forum (March 13 and September 9); meeting of the Council for Interregional and Cross-Border Cooperation (September 10) and other meetings. At the same time, the topic of cooperation in combating coronavirus infection and post-crisis economic recovery was one of the main topics in all events held within the CIS.

During the year, under the chairmanship of Uzbekistan, two meetings of the Council of CIS Heads of Government were held in the format of a videoconference: on May 29 and November 6. At the first, the "Strategy for the economic development of the CIS for the period up to 2030" was approved, at the second - the Action Plan for the implementation of the first stage of this Strategy, which covers the period from 2021 to 2025, as well as the Concept of interregional and cross-border cooperation of the CIS countries for the period until 2030 of the year.

Uzbekistan, as the chairman in the CIS, represented the Commonwealth in the international arena and introduced a special resolution "Cooperation between the UN and the CIS” in the 75th session of the UN General Assembly, held on September 22-29 in the format of a videoconference. The resolution confirming the importance of strengthening interaction and coordination between these two organizations, invites specialized agencies and other organizations, programs and funds of the UN system, as well as international financial institutions to develop partnerships with the CIS.

Economic cooperation within the CIS

In the "Strategy for the economic development of the CIS for the period up to 2030" is noted, that the CIS countries have enormous aggregate resources for future economic development and occupy 16% of the world territory. The CIS countries account for almost 30% of the world's reserves of natural gas and coal, 20% of oil, 36% of uranium, 20% of gold, 13% of arable land, etc.

All CIS countries (except Azerbaijan and Turkmenistan) are parties to the 2011 CIS Free Trade Zone Agreement, which provides for a duty-free trade regime. 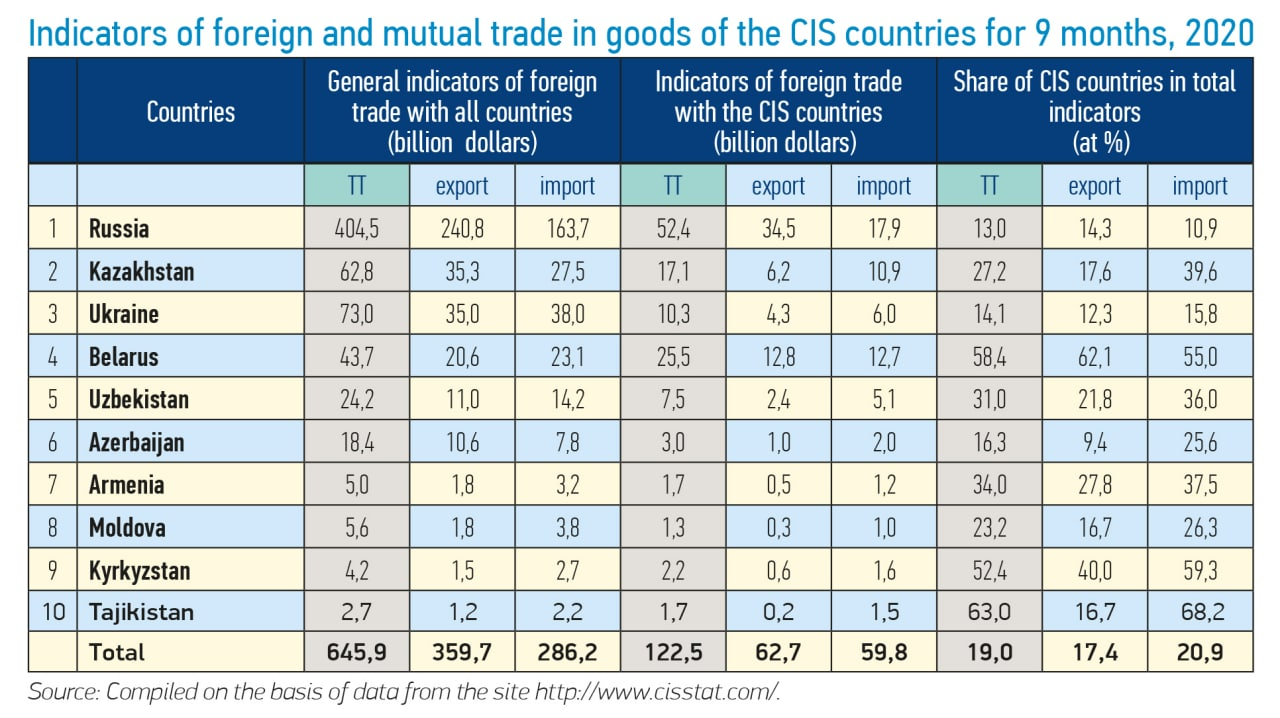 In the context of the CIS countries, there is a different degree of dependence of their foreign trade on the internal market of the Commonwealth.

Foreign trade of Uzbekistan with the CIS countries 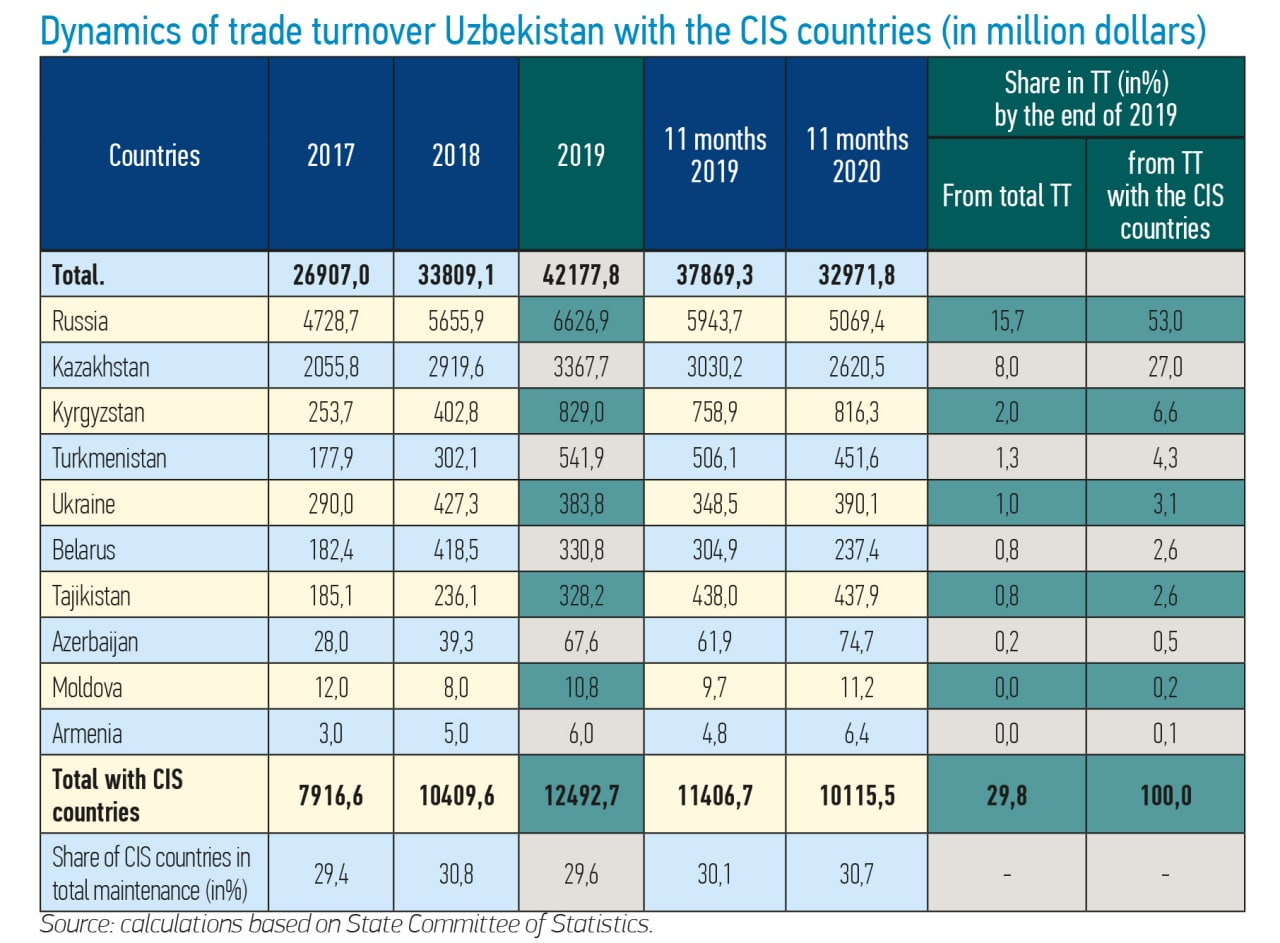 It should be noted that, along with trade, an important indicator in foreign trade is also the volume of Uzbekistan's exports to the CIS countries, which increased in 2017-2019 from 3.7 to 5.3 billion dollars, or 43.2%, and the share of the CIS countries in total exports averaged 30%.

Thus, about 30% of the total export of goods of Uzbekistan falls on the CIS countries, and if we do not take into account raw materials in the total volume of exports, the share occupied by the CIS states in Uzbekistan's foreign trade will be much higher.

At the same time, it should be noted that in recent years Uzbekistan has had a negative balance in foreign trade (it sells less than it buys), including with the CIS countries. For example, at the end of 11 months, Uzbekistan's exports to the CIS countries amounted to $ 3.5 billion, and imports - $ 6.6 billion, as a result of which the negative balance amounted to $ 3.1 billion.

In the structure of Uzbekistan's exports, raw materials (gold, energy and oil products, as well as non-ferrous metals and products from them), which account for more than 50% of exports are supplied mainly to the markets of third countries. 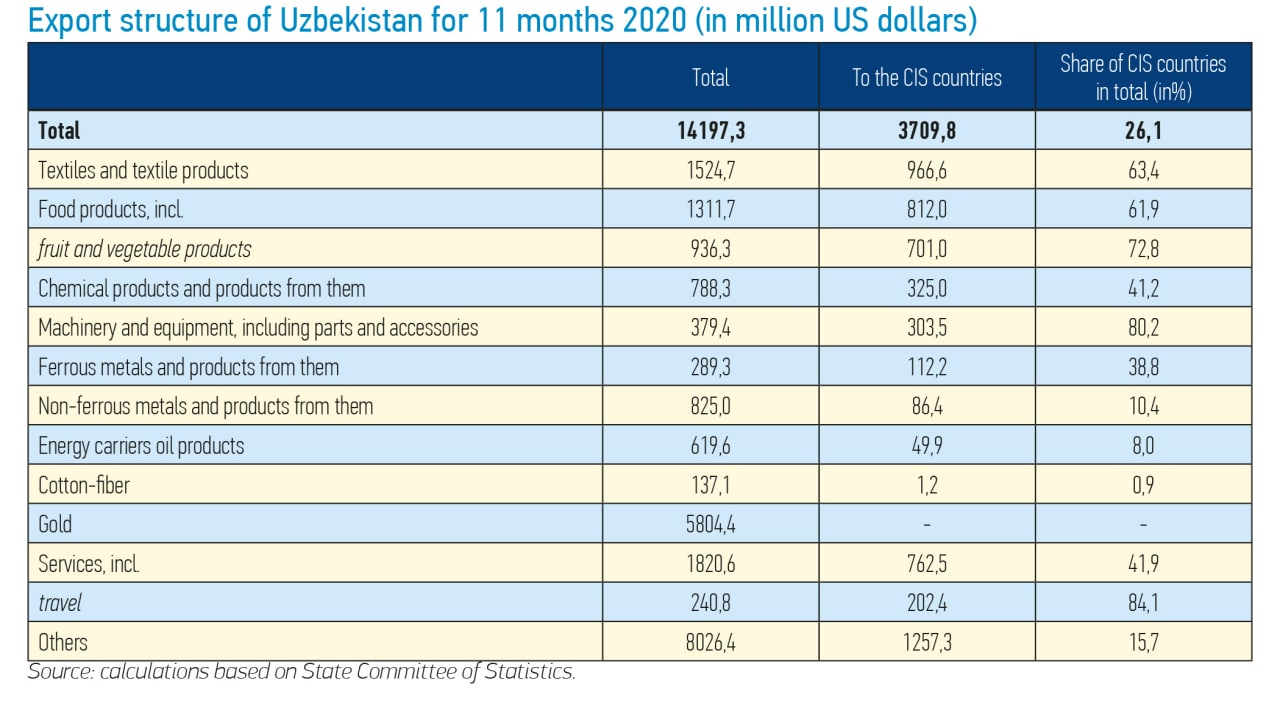 Thus, mainly finished products of the manufacturing industries of Uzbekistan are supplied to the CIS countries. Thus, at the end of 11 months of 2020, the share of CIS countries in total exports in terms of the “machinery and equipment, including parts and components” product range (mainly cars) amounted to 80.2%; "Fruits and vegetables" - 72.8%, "textile" - 63.4%, "chemical" - 41.2% and "products from ferrous metals" (also includes household gas stoves) - 38.8%.

Taking into account the prospects for the development of economy in Uzbekistan, the markets of Uzbekistan can become the main consumers for finished products with high added value, including electrical, automotive, textile, leather and footwear, pharmaceuticals and others.

In this regard, the further liberalization of foreign trade relations with the CIS countries quite essential, since it will be more difficult to break through to the markets of third countries with the finished products of these industries due to tariff barriers, high transport costs, as well as due to high competition in these markets and product quality requirements.

In the structure of imports of Uzbekistan, the main share of energy carriers and oil products (95.4%), ferrous (68.9%) and non-ferrous (63.0%) metals and products from them, as well as food products (78.8%) is imported from CIS countries.

Perspectives identified under the chairmanship of Uzbekistan

In the "Strategy for the Economic Development of the CIS for the Period up to 2030", the main goal is the creation of favorable conditions for sustainable economic development, an increase in the standard of living, the well-being of citizens of the CIS countries, taking into account the coincidence of many strategic interests and goals of economic development, including the following:

- building up efforts to deepen industrial cooperation, create new joint high-tech and high-tech industries, including those with a focus on export to third countries;

- increasing the volume of mutual trade and decreasing dependence on imports from third countries of a wide range of goods in strategic sectors of the economy;

One of the most important criteria for economic integration in the Strategy is the growth of mutual trade, for which it is necessary to create conditions to ensure freedom of movement of goods, services, capital and labor within the CIS.

The Plan for the implementation of the first stage of the Strategy provides the following activities:

- support for investment and scientific cooperation;

- ensuring the digitalization of the national economy;

- intensification of cooperation in the field of innovations;

- facilitating the transit of cargo transportation through the state borders of the CIS countries;

- development of mutual trade in goods and services;

The adoption by the CIS countries of the "Strategy for the Economic Development of the CIS for the Period up to 2030" indicates the interest of the Commonwealth countries in the preservation and development of this organization in the future.

The implementation of the proposals put forward by the President of our country at the last summit aimed at expanding multifaceted cooperation will further unleash the potential of the CIS to increase the volume of mutual trade, cooperation in the transport and investment spheres, industrial cooperation, e-commerce, which will undoubtedly be responsible long-term interests of all member countries of the Commonwealth.

Cooperation in the CIS 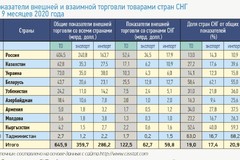 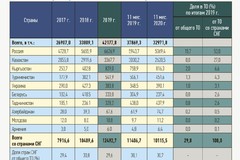 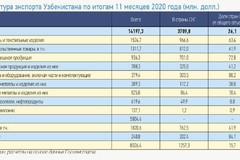 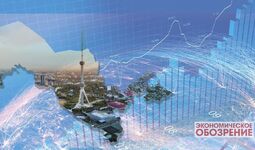 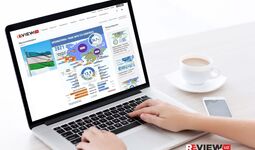 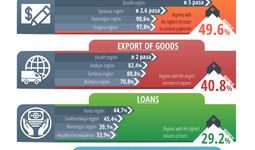 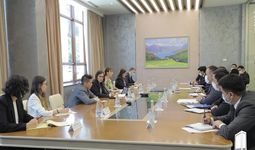 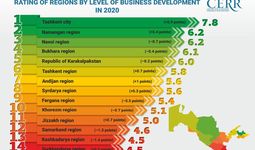 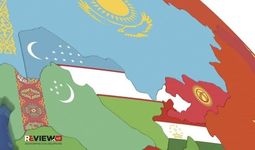