About the main macroeconomic and new additional indicators that effect on the recovery processes in the economy in the article by the director of CERR, Obid Khakimov.

Our country managed to overcome the most difficult year of the pandemic quite successfully, both in terms of combating the spread of coronavirus and in terms of minimizing negative economic and social consequences. Economic growth last year amounted to 1.6%, the volume of production in the agricultural sector grew by 3%, the service sector – 2.3%, industry – 0.7%. The economy and incomes of the population are recovering this year.

The main macroeconomic indicators, such as GDP, inflation rate, unemployment rate and methodology for their calculation has been significantly improved, moreover the reliability of the indicators meets international requirements and standards.

Recently, many new indicators have appeared in Uzbekistan, which make it possible to obtain a fairly complete process and trends taking place in the economic and social spheres. Macroeconomic and new additional indicators are convincing evidence of the rapid recovery processes in the economy.

Economic indicators - are indicators that reflect the state and development of the national economy and its location in one or another phase of the economic cycle. Among the most popular are GDP, inflation, gold and foreign exchange reserves, refinancing rate, government debt, balance of payments, unemployment and a number of monetary indicators.

There are also economic indexes calculated by independent organizations and institutions. These are indexes of manufacturing activity, business climate, economic expectations, and so on. In general, economic indicators indicate changes in aggregate economic activity.

Below we discuss in detail the new additional indicators introduced in recent years.

Listening to the Citizens of Uzbekistan

Since 2018, the project "Listening to the Citizens of Uzbekistan" is being implemented by CERR and the Center for Development Strategy with the assistance of the World Bank. Within the framework of this project, monthly surveys are conducted among respondents in 1,500 households across the country and chairmen of 600 mahallas in all regions of Uzbekistan also take part. 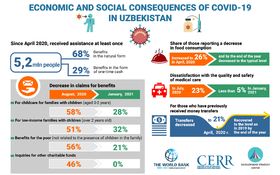 Since the introduction of quarantine in March 2020, the impact of the pandemic on the socio-economic well-being and health of citizens has also been observed, during which more than 18,000 surveys have been conducted. On March 12, 2021, the results of the study during the period from April 2020 to January 2021 were presented.

Thus, according to the study, in the last months of 2020, the chairmen of mahallas reported a decrease in the number of citizens' request for social assistance. The number of new applications for childcare benefits for families with children (aged 0-2 years) decreased by 58% of mahallas in August (2020) and by 28% in January (2021). The number of new applications among low-income families with children (over 2 years old) decreased from 51% of mahallas to 32% over the same period. Applications for other benefits for indigent families (not specifically related to the presence of children in the family) fell from 56% of mahallas in August (2020) to 21% in January 2021. In August, requests for help from other charitable foundations were considered in 46% of mahallas, their number dropped to almost zero in 2021.

It should be noted that the decrease in the number of citizens' requests for emergency and social assistance is a clear indicator that there is a gradual improvement in the economic situation of the population. In general, since April 2020, about 5.2 million people have received emergency assistance. Most of it came in form of social benefits, vouchers (68%) or sum cash benefits (29%).

In April 2020, less than half of the respondents noted that some of their family members were able to continue working after the start of quarantine. While most of the initial employment disruptions were temporary, the rate of recovery in 2020 was slower due to quarantine levels.

The data collected during the implementation of the project "Listening to the Citizens of Uzbekistan". Developing government’s measures taken into account to reduce poverty among the population and mitigate the socio-economic consequences of the pandemic for vulnerable groups of the population. 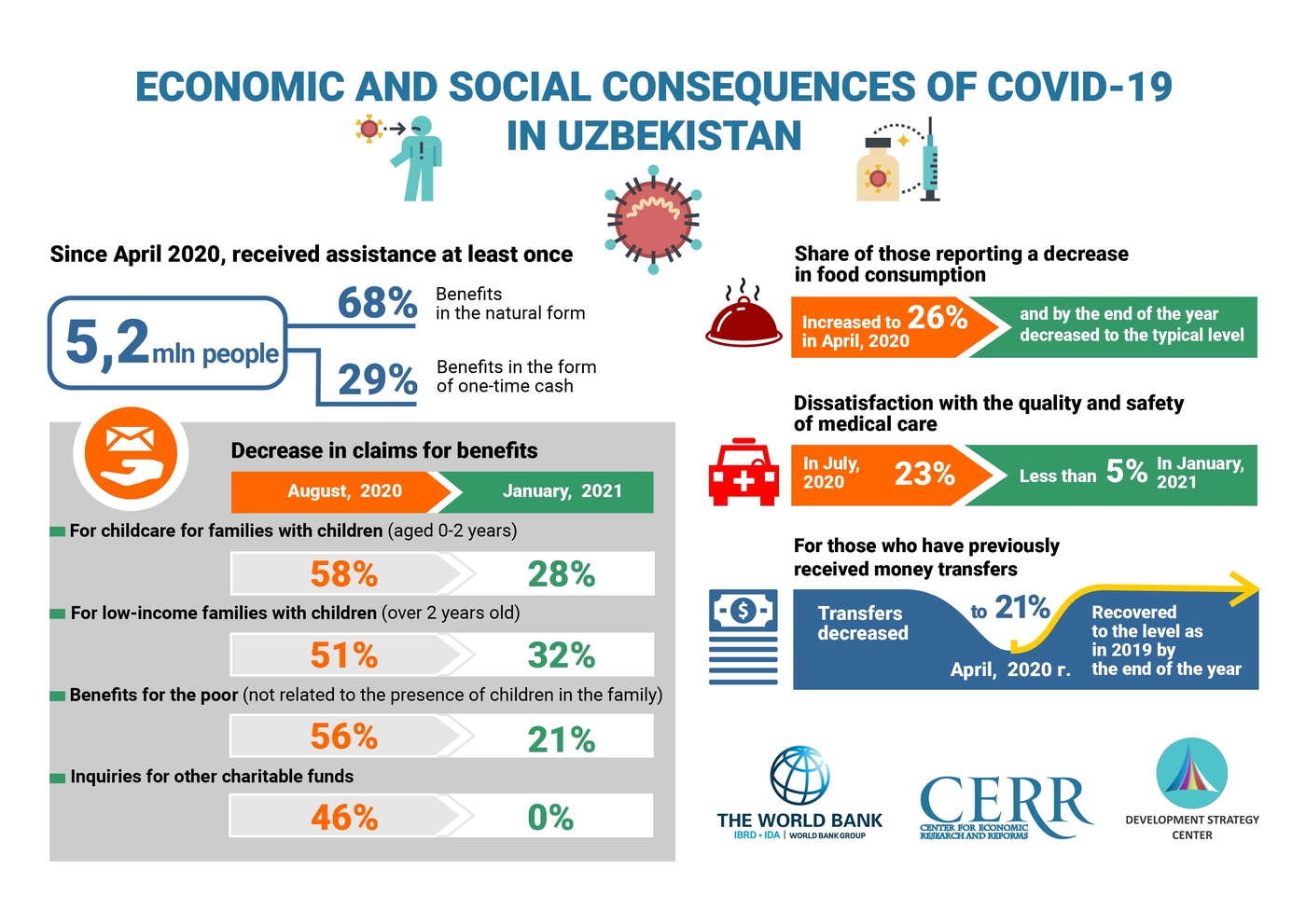 Impact of the pandemic on SMEs

One of the most influenced sectors by pandemic and quarantine restrictions was the small and medium-sized business sector, which plays an important role in the Uzbek economy. United Nations Development Program in Uzbekistan (UNDP) conducted surveys to assess the consequences of the negative impact of pandemic on SMEs in all 14 regions of Uzbekistan during June and October 2020.

According to the June survey, the bulk of enterprises in this sector (78%) did not stop their business activities. The most affected spheres are: providing housing services to the population (hotel business) and the catering sector. The least affected sectors are: agriculture, forestry and fisheries. A significant number of small and medium-sized businesses (64%) have not changed their plans for the development of their business since the start of the pandemic. Only 5-6% of enterprises have started mastering new forms of doing business and accelerated the development of new types of goods and services.

The study also assessed the effectiveness of government measures to support business. The group of effective measures includes: decrease in interest rates on short-term loans (up to 1 year), rent for state assets, social contributions and taxes on labor income, along with one-time payments of social assistance (5 million sums each) to companies’ employees. Relatively effective measures include credit and tax holidays, extension of government guarantees (all for a period of 1 year) and tax holidays for employees.

Business activity is the most important indicator of the economy and indicates the opportunities for entrepreneurs. CERR carries out monthly monitoring of business activity at the republican and regional levels to determine the Business Activity Index in Uzbekistan. 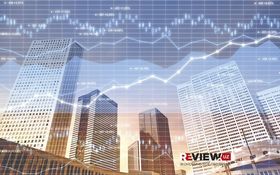 Business activity index in Uzbekistan increased by 34 points in February

The business activity index (BAI) has been calculated by CERR for a long time and it is based on the calculation of the following components: the intensity of operations of business entities in bank accounts, the number of operating business entities, the dynamics of purchasing raw materials on the commodity exchange, registration of trade marks.

During the pandemic, the BAI showed declines in economic activity compared to the previous month in April and July last year, which were due to the introduction and partial resumption of quarantine restrictions during these months. After that, there was a progressive increase in this indicator. The sharpest growth in the BAI occurred in February this year, when the index rose by 9.9% compared to January and by 3.4% compared to February last year.

Business activity indicator is monthly calculated by CERR on the basis of monitoring the operational data of the State Customs Committee, State Oil Company, Central Bank and UzEX in all regions of the republic. This indicator also demonstrated the region’s business activity growth in March of this year. 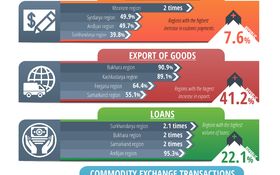 So, according to monitoring data, tax revenues of the republic in the period from January 1 to March 31 of this year increased by 23.4% over the same period last year.

Receipts from customs payments increased by 36.5%. At the same time, there is a dynamic growth in exports, which is increased by 21.8% compared to the same period last year.

An important indicator of the business activity of enterprises is its need for loans, both for investments and for expanding operations. In this respect, it is quite indicative that in February the volume of loans issued by commercial banks increased by 12.7%.

The state of business climate

Starting from April 2020, CERR assesses the state of the business climate in the country, which reflects the expectations of entrepreneurs about the prospects for the development of their business for the next 3 months. Business climate indicators can range from -100 to 100. 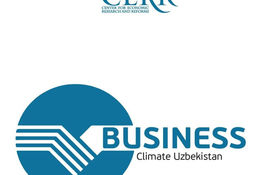 Below are the latest data for the month of February, calculated on the basis of survey from 1,700 enterprises throughout the country. According to the survey data, the consolidated Business Climate Indicator amounted to 60 points, which is almost 2 times more than in the crisis period of April last year. This indicator evaluates the state of the business climate in the country as positive.

The dynamics of the real estate market shows that economic activity has dropped sharply as a result of the quarantine restrictions. In particular, in April last year, the lockdown led to a decrease in demand for real estate by 87.1% (by 94.2% in Tashkent and 89.8% in the Tashkent region) compared to the same period in 2019. In the current year, the real estate market is showing steady growth. In March, the number of real estate contracts remained unchanged compared to February and amounted to 20.2 thousand, which is 34.4% more than in March last year. 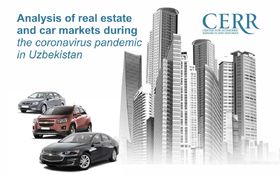 In Tashkent, the number of concluded purchase orders and sale agreements amounted to 6.17 thousand, which is 0.9% less than in February of this year. At the same time, growth compared to the same period in 2020 amounted to 32.6%, which in turn also shows that the demand for real estate has returned to its long-term trend.

In March, demand for the car market showed moderate growth and increased by 7.7% compared to February of this year. Car sales grew by 47.4% compared to March 2020, when sales decreased by 34.6% compared to the previous month as a result of a lockdown in the republic.

During the reporting period, the number of registered and re-registered cars increased rapidly in the Republic of Karakalpakstan (31.5%), Khorezm (30.5%), Jizzakh (23.5%) regions.

More indicators to improve the situation in a particular economic direction are being developed.

For example, CERR has developed a weekly food price index for the consumer basket based on the cost of basic foodstuffs: meat and dairy products, vegetables, fruits, melons, legumes, rice, flour, pasta, vegetable, butter and sugar. When compiling a single index, a weight is used to characterize the consumption habits of the country's population (the higher the consumption of this product among the population, the higher the weight). But so far the parameters of the consumer basket have not been officially approved.

It can be stated that in recent years the range of instruments used as economic indicators has been significantly expanded and work is actively continuing in this direction. All indicators, both the main macroeconomic ones and those introduced in recent years, clearly indicate a confident positive dynamics of recovery processes after a sharp economic recession during a hard lockdown last year. Moreover, a detailed analysis of the changes in the indicators clearly shows the important role of measures taken by the government to support business and the population in the dynamics of economic recovery.

Obid Khakimov, Director of the Center for Economic Research and Reforms under the Administration of the President of the Republic of Uzbekistan. 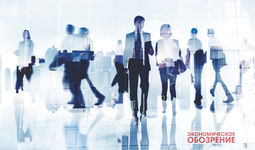